A watch by any other name…

A watch by any other name…

What could be more natural than for a master watchmaker wishing to launch his brand to do so under his own name as a pledge of expertise? Particularly when the majority “cut their teeth” working for the sector’s leading firms.

It’s official: Christophe Claret is now a bona fide brand name. What began as a one-off initiative, i.e. the launch of the Christophe Claret DualTow commemorating the manufacture’s twentieth anniversary, has evolved into a long-term project. Despite the fact that, after setting up Jean Dunand with Thierry Oulevay, the master watchmaker had no such enterprise in mind, as he recently explained: “I became a joint shareholder in Jean Dunand so that I could develop projects that were just too “out there” for our clients, and make the products that really mattered to me. I’ve always refused to launch a Christophe Claret brand for personal reasons, as it would mean spending at least a week every month promoting the Christophe Claret name somewhere in the world. Also, and in all modesty, no one brand could take on all the different products that come with creativity such as ours.” It’s a different story today, with three movements already in the development stage under the aegis of the new brand, which has its activities mapped out for the next four years.

Christophe Claret is one of numerous watchmakers to have become their own brand name these past few years, banking on their signature and the reputation that goes with it to launch their new enterprise. All of which makes perfect sense, given that these professionals usually already have exceptional timepieces, made for third parties, under their belt or years of experience in restoration, if not both. An entire generation of watchmakers’ brands has emerged since the 1990s, including Alain Silberstein, Andreas Strehler, Antoine Preziuso, Beat Haldimann, François-Paul Journe, Greubel Forsey, Kari Voutilainen, Paul Gerber, Parmigiani, Philippe Dufour, Richard Mille, Thomas Prescher and Vianney Halter. Several of them earned their stripes at the Académie Horlogère des Créateurs Indépendants.

Where they have led, others have followed. Alongside Christophe Claret, more new signatures have appeared such as Peter Speake-Marin, who unveiled his Marin 1 at this year’s Baselworld, Lionel Ladoire, Maximilian Büsser & Friends, Michael Bittel and Romain Gauthier. This should come as no surprise, given the fascination exerted by centuries-old firms – Audemars Piguet, Breguet, Chopard, Jaeger-LeCoultre, Lange & Söhne, Patek Philippe and Vacheron Constantin to name but some – whose timepieces instantly conjure up watchmaking’s geniuses of the past.

You need a good product and a good story. You can't have one without the other.
Steven Holzman

These legends are now joined by watchmaking’s new stars, past masters in the science of complications, intricate movements, and the quality of finish that gives pride of place to such crafts as enamelling and engraving. Coming as a logical consequence of this are initiatives such as Maîtres du Temps, which makes a conscious effort to promote the watchmakers who produce its timepieces… watchmakers of the likes of Christophe Claret, Roger Dubuis, Peter Speake-Marin and Daniel Roth, none of whom need any further introduction. They collaborated on Maîtres du Temps’ Chapter One and Chapter Two timepieces. “Doing good business comes down to a simple equation,” comments Steven Holzman, founder of Maîtres du Temps. “You need a good product and a good story. You can’t have one without the other. We had the skills to create very good products. We just needed to tell a good story…” One of the manifestations of this story is a short film by independent British directors which spotlights the watchmakers in a highly cinematographic way.

First to blaze this trail was Maximilian Büsser, when he called on the sector’s leading talent to develop Harry Winston’s Opus range. It pays tribute to the unsung heroes, to the watchmakers who are traditionally passed over in silence by the brands who put their name to the timepieces they commission. Büsser’s new set-up, MB&F, continues in this vein: every person to contribute to its Horological Machines is credited each time. “I just come up with the ideas, I could never put them into practice by myself. We’ve created a virtuous circle: the craftsmen I work with allow me to turn my dreams into reality and I give them their first platform from which they can communicate.”

The Confrérie Horlogère, founded by Mathias Buttet at the time of BNB and since renamed Confrérie Horlogère Hublot, shares the same philosophy. Its goal was to give young watchmakers a chance to launch their own brand, with the company’s help. At Hublot, it is a “highly specialised division producing watch complications” which recently unveiled Liberty, a revisited pocket watch in the shape of a bullet and which houses a tourbillon. In a sector that cultivates close ties with its customers, the tradition of associating timepieces with their creators is as alive today as ever. 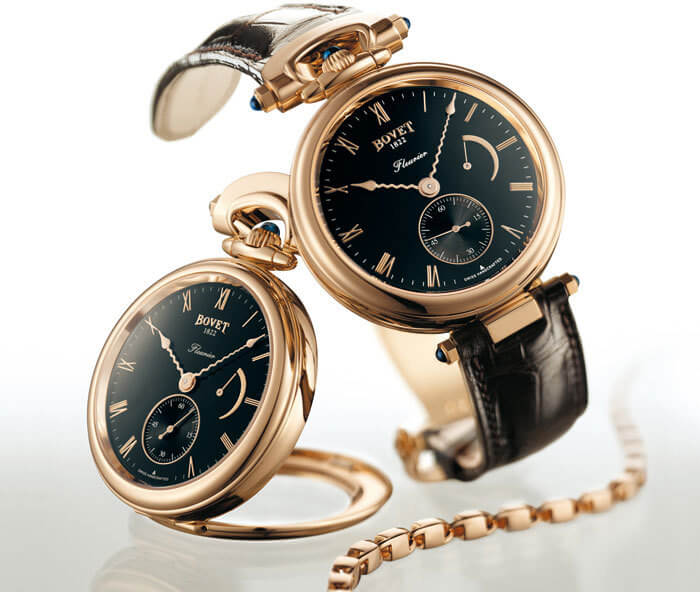 Treasures from the past