Baselworld vs SIHH: who stands to gain?

Baselworld vs SIHH: who stands to gain? 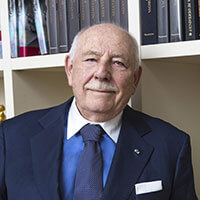 President of the FHH Cultural Council

An entrepreneur at heart, though a man of letters, Franco Cologni was quick to embark on a business career that would lead him to key roles within the Richemont Group.

It seems there is always someone doing their level best to pit Baselworld and SIHH one against the other. As though these two fine initiatives were opposites that could never attract… when for the past 28 years they have coexisted on perfectly good terms, each having “just about” found its market and its audience. And it’s this “just about” that should be occupying our thoughts.

What’s happening at Basel today isn’t a revolution but a necessary evolution which, granted, should have been undertaken before now. But let’s not point the finger; hindsight gives everyone 20/20 vision. People, things, circumstances… everything changes but change itself. Forecasting, anticipating is rarely without risk, but this is something I have always expected of myself and those who work alongside me. Back in 1991, under the stewardship of Alain Dominique Perrin, we set up the first Salon International de la Haute Horlogerie (SIHH) because we could see that we were dealing with a particular perimeter, with strong values and expectations, and that this world of its own deserved a fair of its own, in Geneva, the home of Fine Watchmaking.

Then came the boom in Fine Watchmaking and with it an explosion of creativity, innovation and occasionally over-the-top prices. Which is why, again with my colleagues and friends Jasmine Audemars and the late Luigi Macaluso, we established the Fondation de la Haute Horlogerie (FHH) in 2005, precisely to safeguard and promote the highly specific expertise of Fine Watchmaking worldwide. Because who better than the watchmakers themselves could express and convey techniques and skills that are both centuries-old and astonishingly modern too? We sensed how important it was to diffuse the culture of Fine Watchmaking and for this reason we developed, with the FHH, exhibitions, lectures, digital tools, learning and certification programmes that would take the message of Fine Watchmaking into the world and make it all the more desirable across all five continents.

The global financial crisis of 2008 made its mark and the Swiss watch industry without exception began to take a long, hard look at itself and its business model. We did the same with SIHH. We moved the fair forward to the start of the year, thus making it a bellwether for the twelve months to come and enabling a more efficient approach to manufacturing and distribution cycles.

In 2016, the cream of independent watchmakers made their debut at SIHH in the Carré des Horlogers. This initiative, which had long enjoyed the support of the FHH and, to varying degrees, others, brought a breath of fresh air to the fair, where it trains the spotlight on the creativity, innovation and out-of-the-box thinking of this horological “new wave”. Radical changes have been borne out in recent years, from the profound transformation of watch distribution through retailisation, disintermediation and e-commerce to the emergence of social media and new opinion leaders. The FHH and SIHH must therefore constantly adapt to satisfy the requirements and expectations of the brands which take part in the fair and/or are partner to the Foundation.

Even greater transformations lie ahead as we prepare to enter a profoundly digital decade. SIHH has a duty to be part of this movement and to present itself as the international showcase for Fine Watchmaking in the world; a gathering of professionals, collectors and other clients, of media and influencers; to stand out as the “Davos of Fine Watchmaking”, a creator and conveyor of content, the place where trends are made and unmade, and important things happen. And like it or not, we believe Geneva is where Fine Watchmaking was born and where it must continue to thrive.

Having left the world of business and having reached an age from which, it would seem, I can view matters with a certain detachment and the wisdom that brings, I believe no good can come from opposing Baselworld and SIHH. These are two complementary events which can exist side by side, provided each sticks to its role and its territory: Basel on the Rhine and Geneva on the Rhone; rivers with different sources and different destinations.