How Rolex is working for a healthier planet – Part two

How Rolex is working for a healthier planet – Part two

Water is one of the biggest environmental challenges, from access to drinking water, at risk of becoming a luxury, to the threats that pollution and overfishing represent for the oceans and marine life. Many of the projects that Rolex supports propose innovative solutions.

Sylvia Earle’s Mission Blue initiative is the third component of Rolex’s Perpetual Planet campaign (see part one). This marine biologist, with Rolex’s support, highlights the fragility of ocean ecosystems. As she explains, “We used to think the ocean was so big, so resilient, we could not harm it. In a few decades we have disturbed basic planetary systems. They are interwoven and we are only now realising their true importance. Many people still don’t understand that protecting the ocean means that we’re protecting ourselves.”

Once again the objective isn’t to merely observe a situation but to put forward solutions. For Mission Blue, this means encouraging local communities and governments to create safe havens for marine life under threat from human activity by establishing protected areas known as Hope Spots. Earle aims for 30% of the world’s oceans to have protected status by 2030; an ambitious figure compared with the current eight per cent.

Mission Blue isn’t the only water-related project to receive Rolex’s support. One of the four classical elements originating with the pre-Socratic philosophers, water features prominently among the various initiatives to benefit from the Perpetual Planet campaign. These range from exploration and protection of marine biodiversity to scientific solutions to pollution. One particularly important initiative is the Okavango Wilderness Project, recipient of the 2019 Rolex National Geographic Explorer of the Year award. Over a period of four years, the expedition team has travelled across three countries along rivers which feed the Okavango Delta, one of the planet’s last remaining wetland wildernesses and one of the most biodiverse places in Africa. In its presentation of the project, Rolex emphasises the vital importance of the delta: “An average of 2.5 trillion gallons of water flow through the Okavango watershed every year, providing water to a million people and creating a haven for wildlife. But the delta’s future is uncertain. Its health is linked to that of rivers that originate in Angola, then converge and flow through Namibia into Botswana. These rivers are vital to the region’s future, but are currently unprotected outside of Botswana.” The purpose of the Okavango Wilderness Project is help give this area that vital protection.

Several laureates of the 2019 Rolex Awards for Enterprise focus on water. João Campos Silva is one. Working alongside local associations, this Brazilian fisheries biologist wants to save the giant arapaima – the largest scaled freshwater fish in the world – from extinction and in doing so also protect the livelihoods and culture of rural communities in Amazonia.

“The arapaima is a very large fish that can reach up to three metres long and 200 kilograms in weight. It has played a central role in feeding Amazonian people since the development of the first human society in the region,” says Campos-Silva. “Due to overfishing, habitat fragmentation and other human impacts, wild populations of arapaima have been decimated, almost to the point of extinction in many localities.” Thanks to João Campos-Silva, the arapaima now has a chance of survival. By closing small river-connected lakes to fishing, plus careful fishery management by local communities, arapaima numbers in certain areas have recovered 30-fold. Nor is this the only threatened species to benefit: manatees, giant otters, giant turtles and black caiman have all returned to the lakes in question. Campos-Silva hopes to extend the conservation plan to 60 communities living outside the protected areas with the aim of increasing arapaima populations fourfold in just three years.

Miranda Wang is another 2019 Rolex Award laureate. Her company, BioCellection, is developing unique technologies to transform unrecyclable plastic waste into high-value chemicals with applications in the manufacturing of cars, electronic goods and cleaning products.

“If this 25 year-old Canadian entrepreneur fulfils her goal,” says Rolex, “a third of the world’s plastic waste – which now chokes landfills, rivers and oceans – could be converted into new wealth.” This is no small challenge: in the United States alone, plastic is piling up at waste management facilities and landfills at a rate of 30,000 tonnes every month since China banned imports of plastic in 2018. Currently, less than a tenth of the world’s used plastic is recycled. Vast amounts accumulate in offshore zones. The largest of these – the Great Pacific Garbage Patch halfway between Hawaii and California – is a floating mass of 80,000 tonnes of plastic waste covering an area three times the size of France. Miranda Wang and others like her are working to save the planet from destruction; let’s not forget that we can do our part, too. 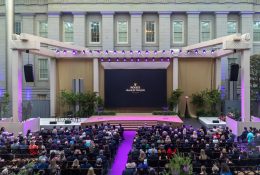