Twenty years ago, Michel Parmigiani, a man who has made restoration an art form, set up his own brand. One whose Senfine movement promises a “historic” new departure for watchmaking.

The Parmigiani Fleurier restoration workshop is truly one of a kind. It has laid its stethoscope on the ailing heart of some of the rarest, most prestigious objects to be found among antique timepiece collections. Understandably, because for Michel Parmigiani, restoration is as much an art as a science that he has practiced from the time he set up as an independent watchmaker, in 1976 in Couvet, his childhood village in Val-de-Travers (Neuchâtel). One only need browse the restoration notes for the singing-bird pistol, an early nineteenth-century marvel, attributed to the Rochat brothers and brought back to life after twelve months’ work, to realise just how daunting a task restoration can be. Particularly as this extraordinarily complex automaton had suffered both the ravages of time and the unsympathetic hand of earlier interventions.

Less complex perhaps but just as striking in its beauty, the Yusupov Egg, another of the wonders in the Maurice-Yves Sandoz collection, stands in all its splendour at the centre of the restoration workshop. It too has been given a new lease on life prior to taking the spotlight at Salon International de la Haute Horlogerie. As with any piece this age, when admiring the sculpted gold and flinqué enamel of the egg, mounted on three pilasters on lion’s-paw feet, one cannot help but feel the weight of its past. A gift from Prince Felix Yusupov to his wife, Irina, for their twenty-fifth wedding anniversary, as attested by the “XXV” set in its base, the egg was made by Fabergé at the turn of the twentieth century. It takes us back to the fading hours of the Russian imperial throne, during which the prince initiated and perhaps even took part in the conspiracy that led to the assassination of Rasputin.

Inspired by splendours of the past, Michel Parmigiani lets his thoughts wander to imagine a possible sequel to one or other masterwork.

Unlike the pistol, this Louis XVI-style clock, whose revolving enamel dial is studded with emeralds to mark the half-hours between diamond hour numerals, had suffered only natural wear. With the diagnosis duly established, restoration entailed no major difficulties. Such splendours of the past are endless sources of inspiration for Michel Parmigiani, who delights in letting his thoughts wander to imagine a possible sequel to one or other masterwork. The Yusupov Egg was no exception: the self-same concept of revolving hours can be found on the Cat and Mouse table clock. A claw from the cat, sculpted in a block of solid obsidian, points to the hour, in deference to the head of the asp that is coiled around the Fabergé egg.

As a restorer, I like to say that five hundred years of history have passed through my hands.
Michel Parmigiani

“As a restorer, I like to say that five hundred years of history have passed through my hands,” he says. “I’ve learned to decipher the coded language of my predecessors. I’ve also learned humility when confronted with these extraordinary objects, created from a perfect mastery of mechanics and a desire for beauty that commands admiration. Certain projects will remain forever engraved on my memory, such as the work carried out on one of Breguet’s sympathique clocks, thought to be beyond repair and which took me an entire year of effort. Or the five thousand hours spent on the singing-bird pistol, which we entirely rebuilt in three dimensions. It was an emotional moment when, after such a long time, we heard the original chirping of the bird, perfectly synchronised with its movements. The mechanism had been completely jammed, and the bird hadn’t sung in over a century!”

As of 2000 and in less than six years, Parmigiani Fleurier became part of a group with the capacity to produce all the components of its watches.

It was this unique expertise, cultivated after nine years of study, which in 1980 won the master watchmaker a new role, in charge of maintaining and restoring the priceless Maurice-Yves Sandoz collection. It also brought such esteemed names as Breguet, Piaget and Vacheron Constantin to his door in search of mechanical solutions. For while Michel Parmigiani has the highest regard for the watchmakers of centuries ago, he has no intention of staying stuck in the past. His encounter with Pierre Landolt, the likeminded president of the Sandoz Family Foundation – which has interests in watchmaking as well as pharmaceuticals, agrofood, hotels and telecommunications – would open new doors. In 1996, Michel Parmigiani was given the means to set up a brand in his own name. These means would grow and grow through a string of acquisitions. As of 2000 and in less than six years, Parmigiani Fleurier became part of a fully integrated group with the capacity to produce all the components of its watches, from the exterior to the movement, balance spring included.

The Ionica, the first Parmigiani wristwatch, debuted in 1999. It later became the Kalpa Hebdomadaire in reference to its Greek column architecture, a recurring theme. The initial Frédérique Piguet base calibre with eight-day power reserve was swiftly replaced by the in-house PF 110 movement. “Having my own movement-making capacities was something I’d been thinking about long before launching the brand, but developing a workhorse mechanism with a view to industrial production is an extremely complex undertaking,” comments Michel Parmigiani. Complex perhaps, but fully mastered considering this first timepiece would be followed by everything watchmaking boasts by way of complications, from the tourbillon to the minute repeater, from the perpetual calendar to the chronograph. This latter function ranks as major technical progress in Michel Parmigiani’s view, and was chosen to celebrate Parmigiani Fleurier’s 20th anniversary in 2016. Over these two decades, Michel Parmigiani has developed thirty-three original movements, not to mention others made for clocks or for third parties.

While having an industrial base, much of Parmigiani watchmaking takes place at the workbench.

Such creativity in watchmaking is sufficiently rare to warrant mention. Particularly as Michel Parmigiani has never strayed from the road his horological ancestors traced. “Although our activity has an industrial base, much of Parmigiani watchmaking takes place at the workbench. Every piece, every part must be adjusted and finished by hand. This is how we are able to create beautiful objects and what justifies our motto, Mesure et Art du Temps. From the time the human hand is involved, added value grows exponentially. It’s now possible to cheat and do everything by machine for purely economic and commercial reasons. We lose the specialness. Having said that, there is huge pressure. It’s up to us not to give in!” Despite its ties to the past, Parmigiani Fleurier is anything but an “old-fashioned” brand. Take the example of the Bugatti Type 370. Its movement, designed like a transversal engine block, is a mechanical tour de force and as original in concept as it is complex to produce. The Senfine, currently under development, is further illustration. Based on a new-concept regulator composed of flexible silicon blades having zero friction points, it augurs power reserves measured not in days but in months. “It’s a promising technology,” concludes Michel Parmigiani. “It warrants developments still to come, but I think we are looking at a new direction in contemporary watchmaking.” History in the making? 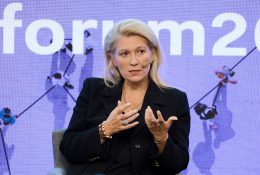