The secondary watch market has been one of the year’s biggest stories. From takeovers to dedicated sales spaces, from market studies to consumer analyses and brand-hosted events, pre-owned is hot news. And for a simple reason: at 8% growth per year, second-hand is the luxury industry’s best-performing segment.

The words “second-hand” and “luxury” in the same sentence no longer surprise anyone. What may be more surprising is the surge in demand for pre-owned luxury goods: 62% of respondents in a 2020 survey by Boston Consulting Group (BCG) with Altagamma said they would consider buying a second-hand luxury item while 25% indicated they had already purchased a luxury item second-hand in the past year. Sign of the times, at end September BCG published the first in-depth study of the question. The Secondhand Opportunity in Hard Luxury reports that “the global luxury market has a fast-growing new base of consumers: second-hand buyers. Our analysis shows that the market for second-hand hard luxury items – primarily watches and jewellery – is worth about €21 billion worldwide and growing at 8% a year, faster than the luxury industry overall. Moreover, this market is still in the early stages.”

The BCG survey presents key insights into the market and its segmentation. First off, watches account for 75% of the €21 billion, with jewellery making up the remaining 25%. Slightly more than half of sales (55%) are made at brick-and-mortar stores, ahead of online channels (35%) and auction houses (10%). As for regions, Europe is clearly ahead (50%), followed by the United States (25%) then China (10%). Critically, BCG has found that “second-hand sales do not reduce the purchase of new products.” In fact with the right approach, sales of second-hand luxury items can reinforce a brand’s value and give access to future consumers.

Watches of Switzerland has bought Analog Shift, its partner for pre-owned watches in the US.

Put simply, the pre-owned luxury market is now too important for brands and retailers to ignore… especially given the influx of new players, some of which are highly specialised. Recent developments confirm BCG’s analysis. In September Watches of Switzerland, one of the largest luxury watch retail groups, acquired Analog Shift, its trading partner for second-hand watches in the United States. “As we began our entry into the US market back in 2018, we saw the pre-owned and vintage segment as a significant area of opportunity and Analog Shift as the ideal partner to help us realize that,” commented Brian Duffy, CEO of Watches of Switzerland Group. So ideal, it is the official representative for pre-owned and vintage in Watches of Switzerland’s four US stores: a figure that is set to grow alongside the number of mono-brand boutiques which the group operates, slated to reach 13 by year-end.

Also in September, the Richemont-owned (since 2018) Watchfinder opened a showroom and boutique inside Geneva’s Bongénie luxury department store. Established in 2002, Watchfinder is a precursor in the certified pre-owned watch market. Having so far stuck to an online business model, the platform is now asserting its presence by expanding into physical points of sale. After Paris, Munich, Hong Kong and Geneva, the United States is next in line, in April 2021.

“There can be no doubt that the secondary market will act as a catalyst,” says Edouard Guibert, Watchfinder’s Country Manager for Switzerland. “Not only because it corresponds to younger buyers’ preference for sustainable consumption but also because it makes desirable vintage timepieces financially accessible. And unlike the vast majority of new watches, the product doesn’t lose value the second it leaves the store. Pre-owned is democratising a luxury market which has so far been a little too cosy. We see ourselves as a meeting point where individuals with a passion for watches can gather, and a collecting point as our customers are buyers as well as sellers.”

For Vacheron Constantin, vintage is “second nature” – understandably for a brand established in 1755 and at the head of some of the most extensive archives and private collections in the field. Its “Les Collectionneurs” initiative presents curated collections of the Manufacture’s historical timepieces which, to return to the Boston Consulting Group survey, serve to strengthen brand value. The Geneva firm was among the first to offer this service, launched in 2005 with a considerable surge in activity in recent years. In-house experts hunt down vintage pieces by the brand from all periods of the twentieth century. Certified and restored, these selections are then offered for sale at special events worldwide. The Vacheron Constantin boutique in Zurich is hosting “Les Collectionneurs” until end November.

Vacheron Constantin knows the value of trust in the pre-owned market.

“Les Collectionneurs represents another facet of Vacheron Constantin,” says Style & Heritage Director Christian Selmoni. “It perpetuates the link between past and present and enables our clientele of connoisseurs and collectors to acquire restored vintage pieces directly through the Maison, which is an important guarantee. The events we organise around the world attract both seasoned collectors and young generations who are eager to delve more deeply into watchmaking history.” Trust is crucial in this accelerating market, as Vacheron Constantin knows. Since 2019 all watches in the “Les Collectionneurs” selection are certified with blockchain technology (making it the first watch brand to introduce digital authentication). Information is encryption-secured on a distributed database and cannot be falsified. The brand will extend this digital certification to all its watches by end 2021. 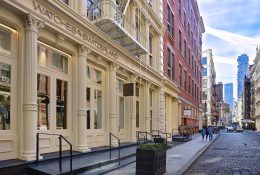