Swatch breaks the mould with its new HQ

Swatch breaks the mould with its new HQ

Not known for architectural swagger, Swatch Group has cut the ribbon on the new Swatch headquarters. The snake-like building is like nothing ever seen before in the branch. For Nick Hayek, it’s about sparking the emotions and arousing curiosity.

“Our father would have been proud of us. And we are very proud of him.” Speaking from the stage of the Nicolas G. Hayek Conference Hall, a 400-seat auditorium on the top floor of the new Cité du Temps in Biel, for a moment Nayla and Nick appeared almost surprised by the sheer scale of the endeavour. The Chairwoman and CEO of Swatch Group had invited journalists and officials to the inauguration, on October 3rd, of the new Swatch global headquarters – a building whose architecture is far-removed from the ordinary notion of an industrial facility. Stretching over 240 metres in length, for some it resembles a snake, for others a dragon’s tail. It is the work of the Japanese architect Shigeru Ban, who used the latest 3D technology to define its exact form. The 25,000 square metres of pristine floor space over five levels are now home to every department of Swatch International and Swatch Switzerland. Work took five years to complete at a cost of CHF 125 million.

Building a temple to time

Swatch Group has never indulged in the architectural extravagance that is rife elsewhere within the branch. In 2007, for example, the Richemont group moved its headquarters in Bellevue, near Geneva, to a steel and glass beacon by Jean Nouvel. The French architect had previously designed the Cartier logistics centre in Fribourg and the Fondation Cartier Pour l’Art Contemporain in Paris. In 2012 Rolex took its turn to present an imposing glazed fortress (230,000 cubic metres) on the outskirts of Biel. In the space of a few years, the industrial estate in Plan-les-Ouates, near Geneva, has been transformed into an open-air showcase of architectural one-upmanship by the dozens of watch brands located there. All these ultra-modern, strikingly designed constructions play an important role in shaping the image of the companies within their walls.

I wanted a building that would contrast with the Omega factory's square, rigid shape, so really the form came naturally.
Shigeru Ban

The least we can say is that Swatch Group has caught up these past ten years or more. More so, it has taken its own direction in the competition to build a gleaming temple to time, simultaneously creating a global buzz. The twisting, turning timber structure comprises 4,600 beams, representing 1,997 cubic metres and 11 linear kilometres. All from trees grown in Swiss forests. The envelope assembles 2,800 honeycombed elements, which can be opaque, in transparent glass or equipped with photovoltaic cells. Each one was made to fit its exact position in the undulating, oblong frame. This outer structure continues beyond the building, extending across Nicolas G. Hayek Street where it comes to rest on the Cité du Temps. This separate “city of time” is home to two museums, for Omega and Swatch, as well as the Conference Hall. “There is nothing standard about this construction,” Nick Hayek insisted. “It is the work of artisans. Without them, it would never have been possible.”

Already commissioned for the Nicolas G. Hayek Center in Tokyo, which opened in 2007, Shigeru Ban is also the architect behind the Omega factory just next door, which was inaugurated in 2017. The overall project, including Cité du Temps and Swatch HQ, cost CHF 220 million in total. Clearly amused by the barrage of questions about the building’s reptilian shape, Ban explained how “first of all, I had to go with the shape of the site [between a river and a wooded park]. I also wanted this building to stand out from the square, rigid shape of the Omega factory. Both use timber beams but I wanted the new building to introduce contrast, so really the form came naturally.”

We didn't want a monumental building as a way to impress or intimidate. We wanted it to arouse curiosity.
Nick Hayek

Using groundwater for heating and cooling, solar power to cover part of the building’s energy needs, and with smart glazing and blackouts throughout, “the snake” – as locals are already calling it – leaves no-one indifferent. The city authorities are hoping it will give Biel greater touristic appeal; Nick Hayek prefers to talk about the new headquarters as an “ambassador for emotion”. “We didn’t want a monumental building as a way to impress or intimidate. We wanted it to arouse curiosity. If you want to find out about Swatch, then you have to come and look.” 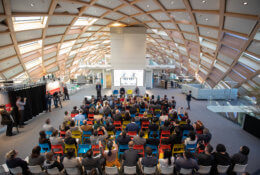