The two independents have unveiled the result of an unprecedented collaboration, each borrowing signature elements from the other to produce two co-signed watches: an Endeavour from H. Moser & Cie. and an LM 101 from MB&F.

They’re friends whose more than ten-year acquaintance is rooted in mutual appreciation and respect. They represent the up-and-coming generation of independent watchmakers who, for the past decade, have been challenging expectations with imaginative, technically complex and creative ways to measure time. “They” are Edouard Meylan and Maximilian Büsser, respectively Chief Executive of H. Moser & Cie. and founder of MB&F. And they are back in the spotlight with the kind of didn’t-see-that-coming initiative they adore, namely two watches, developed in perfect collaboration, whereby each brand has taken inspiration from the other’s “genetic code”. Enter the “Moserised” Legacy Machine 101 by MB&F and the Endeavour Cylindrical Tourbillon by H. Moser & Cie. with a shot of MB&F DNA. Proof that two truly is company.

A meeting of minds

“It’s true that it’s easier to see this kind of project to completion when you know each other as well as Maximilian and I do,” says Edouard Meylan, “and when interests align, which is the case for our brands. We’re both independent and similarly sized. When the collaboration works and the job’s well done, everyone gains. It also paves the way for new challenges. There will be no more silencing the ties that exist between brands in terms of technical developments. These are troubled times and independents need to pull together more than ever before.” When Maximilian Büsser first pitched the idea to Edouard Meylan, it was to ask him to work on a Performance Art piece for MB&F. Straight away, Meylan envisaged a two-way collaboration, as Büsser recalls: “When I called Edouard to say I wanted the two of us to work together on a piece, I mentioned that I really liked the double balance spring, the Moser fumé dials and the Concept watch series. Edouard immediately said I was welcome to borrow them, provided he could also reinterpret one of my machines.”

After the initial surprise, the idea of merging elements from the two brands appealed to both men, particularly as a number of joint initiatives were already on the cards for Watches & Wonders Geneva (the fair was later cancelled). Still, why stop a project in its tracks? H. Moser & Cie. has borrowed MB&F’s concept of three-dimensional movements under a sapphire dome and, specifically, the idea of a flying tourbillon rising above the main dial – the defining feature of Max Büsser’s much-loved FlyingT. It incorporates a cylindrical balance spring – the same one developed by H. Moser’s sister company, Precision Engineering, for the MB&F LM Thunderdome. The tilted subdial, in sapphire, for hours and minutes is another transfusion from MB&F to Moser. Inclined at a 40° angle, it is mounted on a conical gear train. As for the main dial, it comes in H. Moser’s idiosyncratic Funky Blue, Cosmic Green, Burgundy, Off-White or Ice Blue. All five editions are limited to 15 pieces each.

Turning the equation around, MB&F riffs on Moser’s minimalist approach, hence the choice of the Legacy Machine, the “simplest” watch in its collections whose large suspended balance is, in itself, a symbol of passing time. In this understated spirit, the MB&F logo is absent from the dial, while the floating domed subdials showing hours, minutes and power reserve are replaced by hands mounted on a main dial which, naturally, comes in Moser shades of Red fumé, Cosmic Green fumé, Aqua Blue fumé and the famous Funky Blue, giving four editions of 15 pieces each. Last but not least, the large balance wheel has been entirely redesigned and is fitted with H. Moser & Cie.’s signature double balance spring. An NAC coating gives the movement a distinctly contemporary appearance.

“Both these watches are the result of genuine collaboration from both a movement and a design perspective,” notes Charris Yadigaroglou, head of communication at MB&F. “It’s a first for us and for Moser, and it couldn’t have come at a better time in what has been a rather eventful year. When the pandemic kicked in, we hit the brakes in the hope of avoiding the worst. Compared with 211 watches in 2019, we’ve halved our budgets and forecasts. This should mean we’ll avoid losses, no small thanks to this type of project.” Edouard Meylan concurs: “We showed these two watches, still under embargo, in Dubai earlier in the year, and they were well received by retailers. On our side, we’ve already delivered around thirty of them. Add this to the success of the Streamliner, also presented earlier this year and which has sold all 100 pieces in this limited edition, and I really have no reason to complain. We’re selling fewer watches, of course, but better, meaning higher prices. E-commerce, which we introduced during lockdown, currently accounts for between 15% and 25% of sales depending on the month.” For independent brands, 2020 is just beginning. 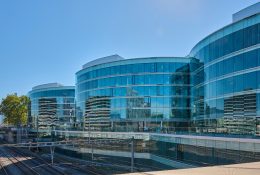