He has put his name to some five hundred watches in total, and currently produces around twenty a year. Vianney Halter, winner of the 2016 Prix Gaïa, uses mechanical science to further his retro-futuristic vision of watchmaking. The kind that could run on steam!

The hallmark of an artisan-creator – the very ones who are the force behind the “new school” of watchmaking – is to produce watches without any equivalent. Watches that leave no doubt as to their parentage. This is something Vianney Halter does very well. Imagine a timepiece that James Mason could have worn in 1954, in his role as Captain Nemo in Richard Fleischer’s screen version of 20,000 Leagues Under the Sea. It’s easy to picture him sporting a big, bold object with porthole-shaped dials showing the time, date, month, leap year, maybe even the Nautilus’ depth as it plunged to the bottom of the ocean. Imagine such an instrument and you’ll have some idea of the horological exploits taking place in Vianney Halter’s workshop. Either that, or you’ll be holding its real-life avatar, minus the depth gauge, the Antiqua Perpetual Calendar Future Past. This is the first timepiece to plumb its maker’s deepest aspirations to catapult watch and wearer into a steampunk ethic that Jules Verne would happily embrace.

The watchmaker and his "machines"

Vianney Halter has set up his workshop in Sainte-Croix – a picture-postcard town in the foothills of the Jura that long thrived on precision mechanics – inside a factory which in a former life produced musical-box mechanisms (musical boxes were once a local speciality). This is a fitting location for the man and the “machines” he has salvaged from the scrap heap or from the furnace’s flames, back when mechanical timepieces were an object of scorn. These machines, which are now enjoying a new lease on life, reveal themselves to be tower-clock movements from hundreds of years ago. Halter has been known to travel halfway around Europe in search of objects to add to a collection that already fills an entire hall. They mix in with heavy machinery that he hopes to use to adjust the landing gear of his Burt Rutan “flying duck” whose wings are hanging from the ceiling pending a new maiden flight.

Despite appearances to the contrary, here in the Vianney Halter workshop there is a place for everything and everything is in its place. Suffice to see our host wax lyrical over a 1943 SIP jig bore, picked up from goodness knows where and transformed by his own hands into a digital machine whose original precision – 1/10th of a micron – hasn’t changed, dare we say it, an inch, to understand that this is a world unto itself, and one that is far removed from a “manufacture” engineered to produce hundreds of movements using semi-automated means. No; Vianney Halter thinks in terms of units, exclusivity and the flawless quality of a haute horology product. Here, it’s always a question of time; the time needed to craft an exceptional watch and, more importantly, the time it takes to imagine such a watch when man and machine become one. The workshop currently completes around twenty pieces a year. In all, Vianney Halter has put his name to some 500 timepieces that are now living their lives around the world.

It is precisely this approach that won Vianney Halter the 2016 Prix Gaïa in the Artisan-Creator category. “Winning this prize has special significance as it rewards the work accomplished throughout a lifetime, rather than one or other creation, as is often the case,” says Halter. “This means the world I have imagined and through which I express myself has inspired a form of recognition among my peers, and that’s reassuring.” This recognition is nothing new. Before taking home the Prix Gaïa, Vianney Halter was a three-time winner of the Grand Prix d’Horlogerie de Genève, first in 2003 with the Opus 3 he developed for Harry Winston, again in 2011 as Best Watchmaker, and a third time in 2013 for Deep Space. The latter is quite literally a stage for a centrally positioned triple-axis tourbillon whose third axis is a rotating cradle that is suspended on one side only to allow maximum transparency. An astounding achievement.

The Deep Space is important to Vianney Halter on more than one count. As well as being a perfect illustration of his skill, it largely contributed to bringing the Vianney Halter name to the attention of watch connoisseurs who are open to a different approach, and who were thus able to discover his work and earlier creations. In other words, it’s thanks to the Deep Space that the Antiqua resurfaced, and is now bringing in a steady stream of orders. Two apparently different watches that in reality share the same fascination with alternative worlds. While the Antiqua, a wrist-borne marine watch, makes clear allusions to retro-futuristic representations of a world that has yet to invent electricity, the Deep Space is inspired by the cult 1960s sci-fi series Star Trek. “I dreamed this watch,” Halter declares. “As crazy as it may sound, I saw so many episodes that eventually I was so steeped in Star Trek my dreams provided the inspiration to make it. It took me a year. A year of going back and forth between a Star Trek dream world and my computer drawing board.” The result is plain to see. Not only has this four-dimensional watch, which adds time to the three dimensions of the tourbillon, been singled out as a landmark creation, it has also proved a watershed in its maker’s career.

The year is 2010. If there were a “been there, done that” T-shirt for watchmakers, Vianney Halter, then 47, would be wearing it. As a new graduate of the Paris Watchmaking School, he spent three years restoring antique timepieces. However, independence ran through him like a stick of rock, and when the desire to go it alone proved too strong to ignore he set up his own restoration workshop, in 1989. His next move was to Sainte-Croix where he teamed up with François-Paul Journe and Denis Flageollet, producing complications for third-party brands. Breguet’s sympathique clock, for one, would keep him busy for a good twelve months. He also “lent a hand” to automaton-maker François Junod. Manufacture Janvier, the company he named after master watchmaker Antide Janvier (1751-1835), followed in 1994. This would be where he began to develop his own ideas, all the while working on pieces for the likes of Audemars Piguet, Franck Muller, Jaquet Droz or Mauboussin. When gaps began to appear in his order book, the consequence of a sluggish Asian economy, he put this new free time to use to create Antiqua, and in doing so caught the attention of Philippe Dufour and the Académie des Horlogers Créateurs Indépendants (AHCI). This marked the beginning of the Vianney Halter name and soon brand that he would drive forward with projects such as the Opus 3 for Harry Winston, a Jumping Hours Moon Phases for Goldpfeil, and the base mechanism for a horological adventure by the name of Cabestan.

Another watch to bear the Vianney Halter name was the Classic, a three-hander of which 250 were made, and the Classic Janvier with its combination of time, moon phases and the rarely seen running equation of time. Again, the year is 2010 and watchmaking still bears the bruises of the subprime crisis. Vianney Halter has reached a low point: Manufacture Janvier, which at one time employed seventeen people, has no option than to lay off staff. He is the brunt of stinging criticism, sharp-tongued bloggers. Still, the ideas keep coming. Star Trek is on permanent play and the Deep Space is creeping its way out of limbo. Vianney Halter’s life as a watchmaker is about to enter a second phase. The business is reorganised, keeping one foot in Sainte-Croix for the creative side and the mad outbursts, and one foot in Dubai for assembly and an embryonic production unit in an emirate eager to help watchmaking take a foothold in the sand. And in the midst of it all, Vianney Halter in his role as the pilot of this time machine. Right on cue, we see 1950s Russian chronographs spread out on one of the workbenches; certain parts are being built into a prototype that will be the preamble to a new Vianney Halter watch that is about to embark on its Journey to the Centre of the Earth. 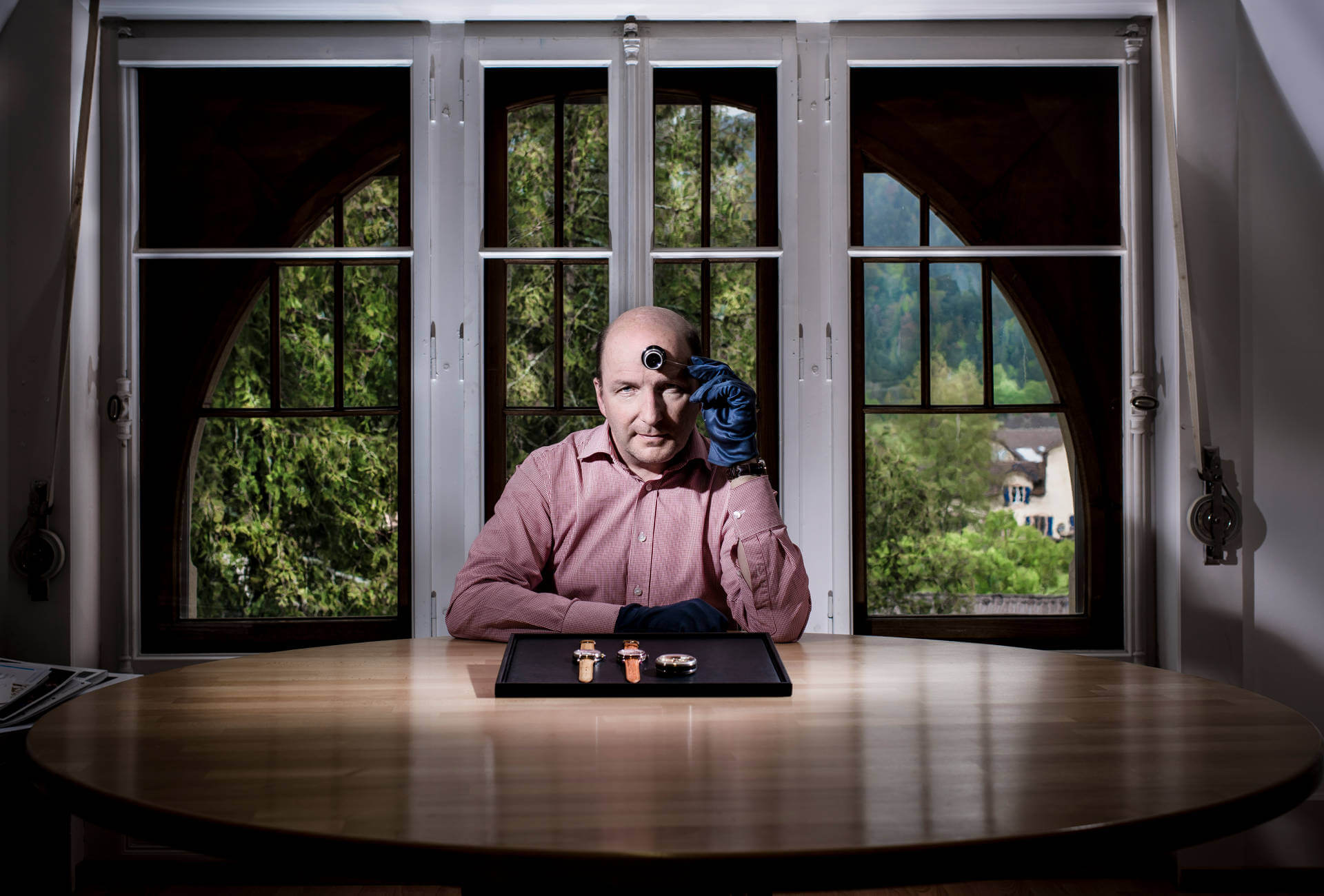 Kari Voutilainen, from Môtiers with love 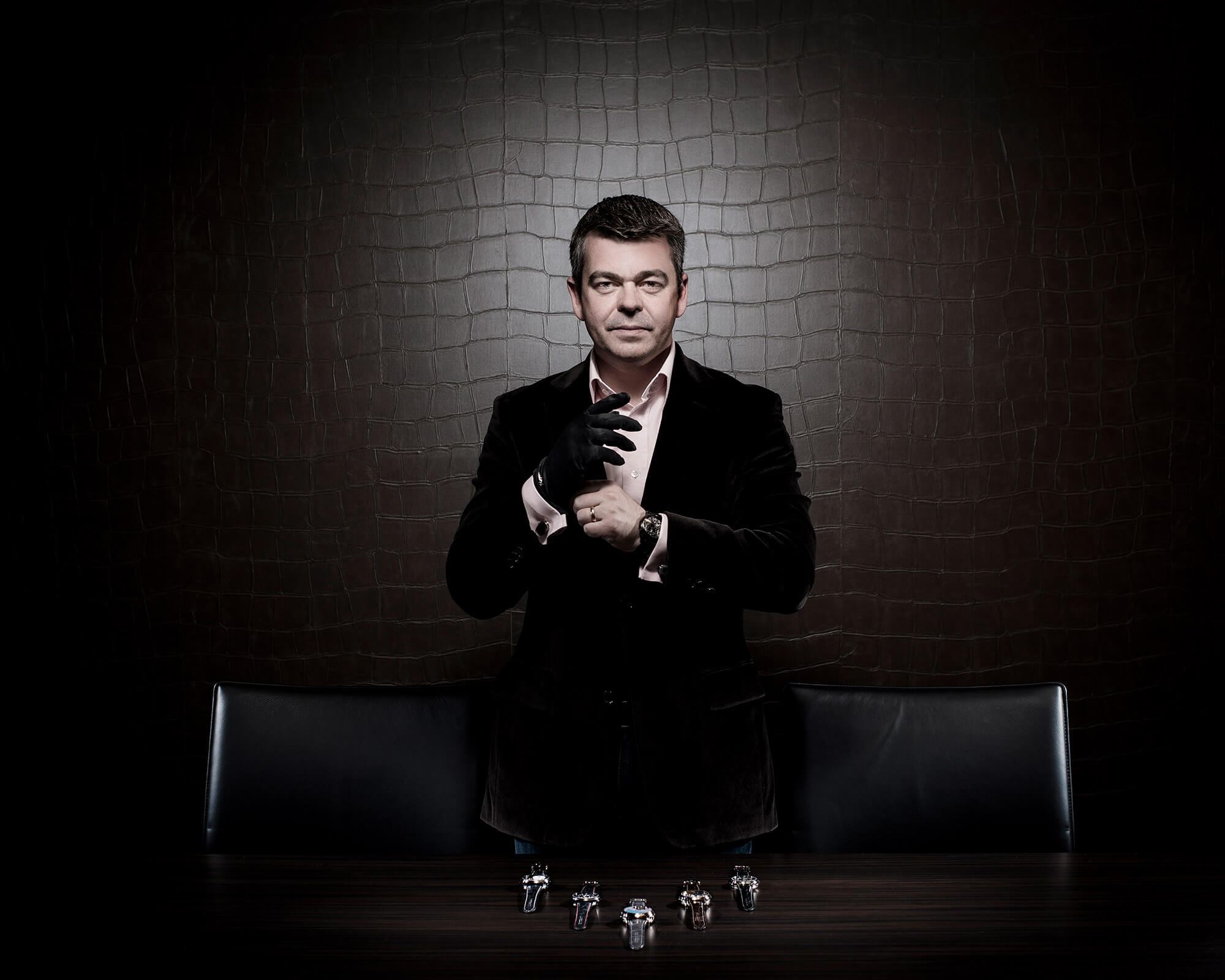 Romain Gauthier, a man with a plan