Watches & Wonders, a world of complications

Watches & Wonders, a world of complications

In watchmaking, nowhere is excellence more evident than in the complications that take a timepiece into another dimension, fuelled by the genius of brands always ready to reinvent themselves. As demonstrated at Watches & Wonders.

One of the most fascinating aspects of complications is to see how functions invented hundreds of years ago continue to inspire extraordinary creativity and innovation, or surprise us with novel layouts and displays. For any maker of Haute Horlogerie, the ability to bring these “grandes complications” to life remains the most eloquent demonstration of excellence and a language widely spoken by the brands taking part in this first online Watches & Wonders.

In 2015 A. Lange & Söhne presented the Zeitwerk Minute Repeater, the only mechanical watch to combine a jumping numerals display with a decimal minute repeater. Comprising 771 parts and previously only available in platinum, it returns as a limited edition of 30 in white gold paired with a midnight-blue dial. A single pusher activates the striking mechanism.

Before entering Cartier’s collections in 1985, the very first Pasha was a specially commissioned, water-resistant watch. Carrying on its exploration of the designs that have helped forge its renown, the Parisian firm has turned its attention to this particular icon. The 2020 Pasha stays true to the original with its robust case and chained crown. Among the new iterations is this skeleton tourbillon in pink gold.

Hermès takes a novel perspective on Earth’s nearest neighbour. An hours and minutes subdial and a date subdial circle the dial, simultaneously displaying moon phases in the Northern and Southern Hemispheres as they do. Adding to this “infinity and beyond” dimension are dials in Lunar, Black Sahara or, shown here, Martian meteorite whose green tones complement a platinum case.

It took HYT two full years to perfect the manual-winding Calibre 501 with 65 hours of power reserve. Two full years to precisely synchronise the progression of a coloured fluid through a capillary tube, to indicate the hours, with the measuring of minutes on a central display. Thanks to a constant-force mechanism, for each elapsed minute the fluid advances by 1.5-microns. This mechanical prowess lies at the heart of the H5, ready to reveal all.

Viewed from Earth, it takes 24 hours and 48 minutes for the Moon to be in the same position. The interval between two high tides is therefore always 12 hours and 24 minutes. This is the sequence shown by the Portugieser Yacht Club Moon & Tide, which converts the rhythm of the hours into the slower rotation of the tidal disc, which performs one full revolution in 14.76 days. A double moon phase completes the display with information about the strength of the current tides.

For the past 150 years, minute repeaters have been at the forefront of Jaeger-LeCoultre’s complication watches. The Manufacture carries on the tradition with this Grande Complication that also incorporates an orbital flying tourbillon. In addition to turning once on itself in 60 seconds, the tourbillon makes one anticlockwise revolution of the dial every sidereal day. This mechanism in turn causes the star chart disc to rotate. A pointer on the periphery indicates the date, the month and the signs of the zodiac.

A world of adventure awaits the five buyers of this limited-edition Panerai, who will set out with Mike Horn on an Arctic expedition. On their wrist, this Submersible in recycled metal. Water-resistant to 300 metres, it is the first in the collection to feature Panerai’s perpendicular tourbillon. The three barrels of the manual-winding P.2005/T calibre in titanium with GMT function deliver six days of power reserve.

This piece began life in 2018 as a concept for the thinnest mechanical watch ever made. Those who imagined such an exploit would never get beyond the prototype stage can think again as Piaget confirms the record-breaking 2mm thickness of the Altiplano Ultimate, using the cobalt alloy case as a mainplate for the movement while completely rethinking the construction of the barrel and the regulating organ.

Tourbillons and nothing but tourbillons is the philosophy behind Purnell; a passion that began with the brand’s namesake, Cecil Purnell, and is perpetuated by his grandson, Jonathan. Confirmation comes in the form of this Escape II in carbon. The cages of the two spherical tri-axial tourbillons rotate in opposite directions at the incredibly high speeds of once every 8, 16 and 30 seconds. Behind this technical tour de force is watchmaker Eric Coudray.

Coming after the asymmetrical flying tourbillon showcased in the Weap-One – revealed in 2017 in collaboration with Concepto and Edge Team – Rebellion has worked hand-in-hand with the Japanese firm Namiki to equip this watch with the first ever tourbillon cage to be made from diamond. It takes 40 days to produce one millimetre of flat atomic diamond; 280 days for the seven millimetres required for the tourbillon cage. Add to this 80 days of plasma fusion polishing and, from beginning to end, production of the cage takes an entire year.

A name not usually associated with grandes complications, Roger Dubuis presents this complex execution of its Excalibur with, of course, a flying tourbillon but also a minute repeater; one of the most complex mechanisms in watchmaking. To spice things up a little, the brand has included a striking indicator, a function indicator and an “all or nothing” pusher for the repeater, which is tuned to a tritone: the medieval diabolus in musica.

An expression of the grand tradition of Genevan watchmaking, with customary elegance this new Traditionnelle combines the precision of a monopusher chronograph with the mechanical choreography of a tourbillon. The carriage is set in motion by the intermediate wheel of the seconds display, thereby enlarging the opening onto the upper plate. The movement is the 292-component Calibre 3200 which Vacheron Constantin developed for its 260th anniversary. 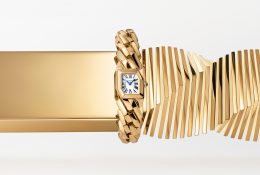