The continued polarisation of the Swiss watch market

The continued polarisation of the Swiss watch market

The latest report on the Swiss watch industry by US investment bank Morgan Stanley, in association with Swiss consultancy LuxeConsult, points to accelerated polarisation within the sector. The main players are growing at significantly higher than average rates while seeing their market share increase.

It’s an impressive figure and one that speaks for itself: 350 Swiss watch brands compete in a market that is dominated for 75% by the four largest groups: Swatch, Rolex, Richemont and LVMH. Symptomatic of an ongoing high level of consolidation within the branch, this is one of the key findings of the 2019 report on the Swiss watch market by US investment bank Morgan Stanley, in collaboration with Swiss consultancy firm LuxeConsult. The report calculates that sales of Swiss watches at retail in 2018 came to CHF 51.9 billion (excl. VAT). By way of comparison, according to the Federation of the Swiss Watch Industry (FH), Swiss watch exports at ex-works price amounted to CHF 21.2 billion in 2018. These more or less CHF 52 billion break down as follows: 28.6% for Swatch Group, 23.5% for Rolex (including Tudor), 18.4% for Richemont and 7.9% for LVMH (Bulgari, TAG Heuer, Hublot and Zenith). This leaves precious little room for the other players in the league; even names like Hermès (0.7% market share for CHF 195 million in turnover for watches) or Kering whose cumulative sales from Gucci Watches, Ulysse Nardin and Girard-Perregaux, estimated at CHF 380 million in 2018, take a tiny 1.6% slice of the cake.

Morgan Stanley goes on to identify the handful of brands whose turnover exceeded CHF 1 billion in 2018. These “magnificent seven” are Rolex (CHF 5 bn), Omega (CHF 2.34 bn), Cartier (CHF 1.66 bn), Longines (CHF 1.65 bn), Patek Philippe (CHF 1.35 bn), Tissot (CHF 1.050bn) and Audemars Piguet (CHF 1.03 bn). The report further indicates that these mastodons outperformed the market in 2018: while the industry overall grew by 6.3% according to FH figures, the bank estimates growth for this “billionaires’ club” at close to 9%.

Polarisation is also evident within these multinationals.

In other words, the big players with a broad price positioning are doing better than their smaller counterparts. By taking market share from them, they are accelerating polarization within the branch; a phenomenon evident within these same multinationals. Out of the 19 Swatch Group brands, the three top sellers (Omega, Longines and Tissot) make up 60% of the group’s turnover and an even greater proportion of its profit.

The report goes on to note that private players significantly outperformed listed ones in 2018, with Rolex, Patek Philippe and Audemars Piguet recording their highest ever sales and profits, as per its estimates. This is, the report says, partly a reflection of their high-end positioning, with average price points at retail (excl. VAT) that range from CHF 12,200 at Rolex to CHF 50,000 at Audemars Piguet, then CHF 53,300 at Patek Philippe, rising to CHF 139,000 at Richard Mille (whose sales grew 15% last year!). Figures from the FH show that the only segments to post growth in 2018 were Swiss watches with an ex-works price of between CHF 500 and CHF 3,000, and CHF 3,000 and above, which gained 7% and 7.3% respectively.

Vertical integration alongside long-term management are two of the reasons private players have performed so well.

Price positioning is one thing. Morgan Stanley cites other reasons for this outperformance. These are vertical integration, management for the long term, zero tolerance for grey market practices, small annual increases in production volumes and rigorous selection of points of sale. By way of example, the report singles out Tudor which, with a relatively modest average retail price of CHF 3,300 and sales in the region of CHF 280 million in 2018, has done significantly better in recent years than the likes of Breguet or Girard-Perregaux. According to the bank, this difference in performance between private and listed players is reflected in their earnings capacity. Whereas the operating margins of Rolex, Patek Philippe and Audemars Piguet exceed 30%, those of Richemont and Swatch Group are 16.45% and 13.6% respectively. Spot the difference… 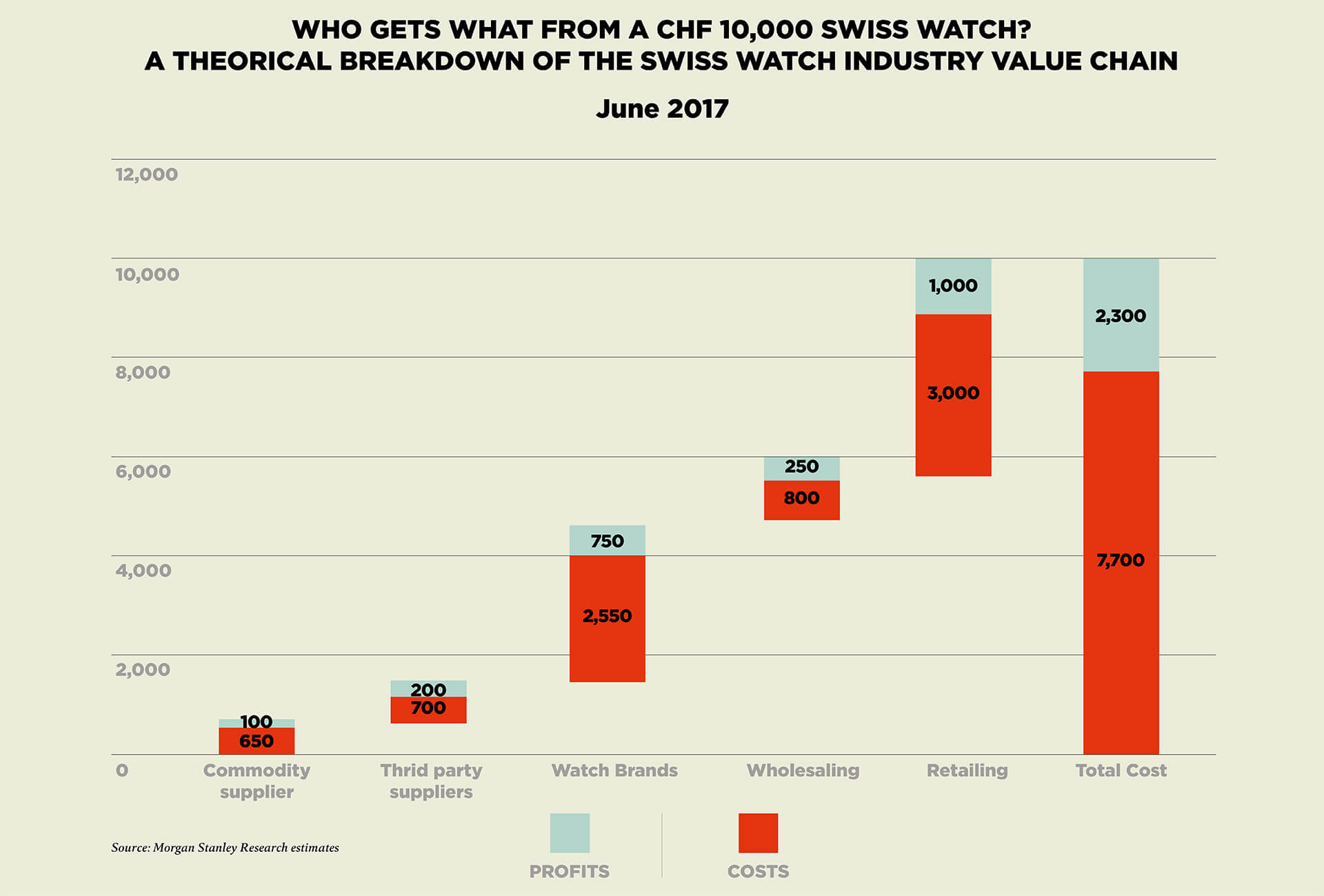 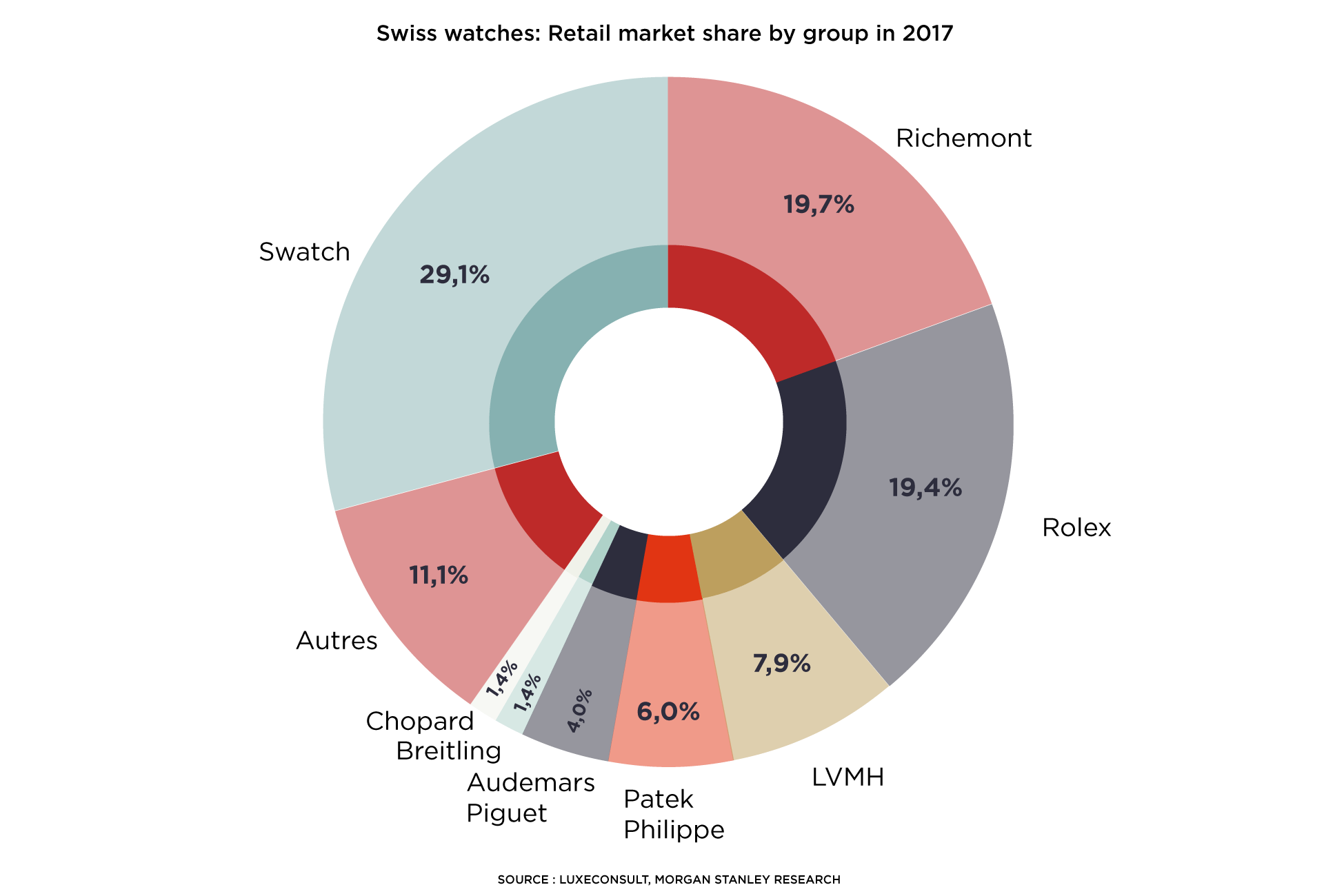